Reception in the Princely City of Celje

On Monday, 28 August 2017, the Celje province was visited by Prince Nikolaus von und zu Liechtenstein and his wife Margaretha, who comes from the Luxembourg Princely Family. They visited Celje and Rogaška Slatina, where Prince Nikolaus officially inaugurated the Slovenia- Liechtenstein Business Institute.

The first man of the Principality of Liechtenstein diplomacy, Prince Nikolaus, and his wife Margaretha visited Slovenia upon the invitation of the Slovenia-Liechtenstein Friendship Association led by Prior Silvester Likar. This was the first visit of a highly-esteemed guest in Celje and Rogaška Slatina. In Celje, the Prince was received by the Mayor Bojan Šrot along with the representatives of the Knightly Order of St George from Carinthia headed by Mr Uroš Kovšca.

Barbara of Celje, a daughter of count Herman of Celje, was married to Sigismund of Luxemburg and Princess Margaretha is the youngest daughter of the Duke of Luxemburg. Therefore, the Princely couple was genuinely interested in visiting some Celje sights. After the sightseeing tour, the Prince entered his name in the book of honourable guests to the city and the couple was also given a protocol gift, a goblet of Barbara of Celje, which has been designed by Oskar Kogoj, a renowned Slovene designer. They were presented with the gift by the Celje Mayor, Mr Bojan Šrot. Although the purpose of the visit was primarily to strengthen friendly ties, it also had a business note.

At 6 pm, a press conference with high-profile guests took place and was moderated by Ms Branka Aralica. Prince Nikolaus von und zu Liechtenstein, who talked to journalists about the visit to the Celje region, the importance of the newly established Business Institute for the region and the Principality of Liechtenstein and Slovenia, was at the forefront of this event. Prior Silvester Likar presented the role of the Slovenia-Liechtenstein Friendship Association and Business Institute, and Chancellor Uroš Kovšca presented the role of the Knightly Order of St George from Carinthia. By visiting Slovenia, the high-profile guest from Liechtenstein also paid tribute to the Knightly order.

At 7 pm, guests attending the gala ceremony began gathering under the arcades of the Crystal Hall and mingled while enjoying a glass of champagne.

At 7.30 pm, the reception organised by the Slovenia-Liechtenstein Friendship Association commenced in the Crystal Hall. Fanfares announced the arrival of high-profile guests: the Slovene ambassador to Switzerland and Liechtenstein, His Excellency Mr Franc Mikša, with his wife, followed by the main guests of honour, HSH Prince Nikolaus von und zu Liechtenstein and HRH Princess Margaretha von und zu Liechtenstein. On behalf of the organiser, the assembled guests were first welcomed and addressed by Prior Silvester Likar and Chancellor Uroš Kovšca. Afterwards, the Mayor of Rogaška Slatina, Mr Branko Kidrič, addressed the audience on behalf of the local community.

A few days earlier, Mr Kidrič had signed a contract for the construction of a modern Centre of Entrepreneurship in Rogaška Slatina. The Mayor presented the tradition of spa tourism and the modern vibes/ beat of Rogaška Slatina by comparing it to Baden Baden and Karlovy Vary.

These welcome speeches were followed by national anthems and a toast. Afterwards, the floor was given to Prince Nikolaus and Ambassador Mikša. Their speeches were warmly applauded since they were permeated with a great deal of optimism and expectations regarding the newly established Business Institute. The Prince and his wife became familiar with all the challenges and opportunities offered by the Celje region.

The guests were celebrating the establishment of the Business Institute late into the night while enjoying exquisite food and drinks and a wonderful cultural programme performed by the Slovene Quartet, led by Mr Zdravko Perger, and the Ormož Music School wind quintet. The gala evening was hosted by Ms Lidija Jerman.

Solemnly, with fanfare music, the Business Institute was inaugurated by Prince Nikolaus who offered his good wishes and expressed his support for the Institute.

Mr Franc Mikša, a former Slovene ambassador to Switzerland and Liechtenstein, thinks that the Slovenia-Liechtenstein Business Institute plays a fundamental role in enhancing cooperation between the two countries. The two countries have been maintaining close cooperation so far, however, many opportunities remain to be seized in Liechtenstein, as well as in Slovenia. Liechtenstein is one of the richest countries in the world and offers numerous opportunities in banking, IT and high-tech sectors. Slovenia, on the other hand, seems to be interesting mainly for investors.

To extend their gratitude to Prince Nikolaus and his wife, the members of the Knightly Order presented them with a prestigious protocol gift, thanks to the support of our golden sponsor Tim Valores d.o.o.

The following day, on Tuesday 29 August 2017, a private breakfast was organised for the Prince, other guests and members of the Knightly Order, which was accompanied by the music performed by young musicians attending the Rogaška Slatina Music School. Afterwards, the guests visited a Network-Entrepreneurial Incubator. The Incubator Director and her team informed the Prince about the work and achievements of the Incubator, which has been expanding into a real entrepreneurial centre. The honourable guest then planted a friendship tree in the park by the Entrepreneurial Incubator. Since the Prince and his wife are art lovers, they were presented with a painting by the local artist Erna Ferjanič. A crystal photo frame, a gift by the Rogaška Glass Factory, will also remind them of their visit to Rogaška Slatina. Everyone was impressed by the Princely couple from Liechtenstein due to their modesty, kindness and openness. When leaving Slovenia, they expressed their heartfelt thanks for our hospitality and promised they would return to Slovenia again. 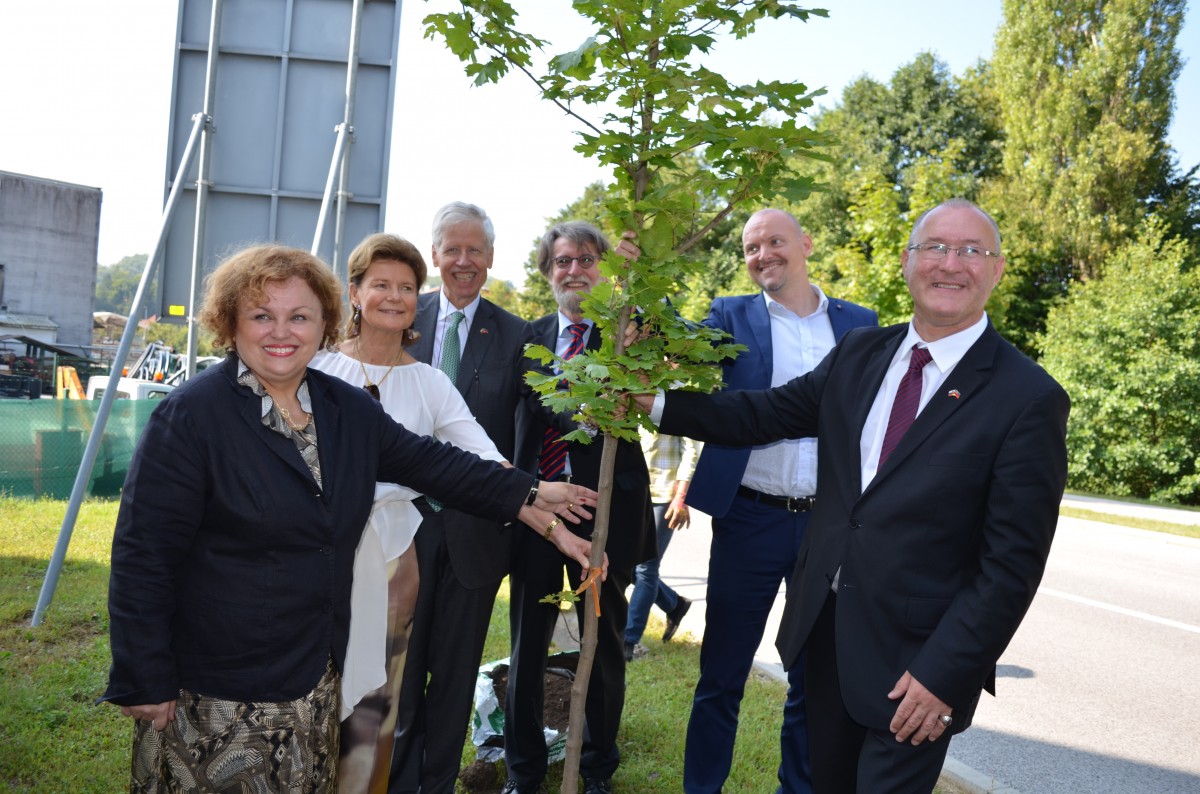 X
We use cookies to ensure that we give you the best experience on our website. If you continue to use this site we will assume that you are happy with it.Ok